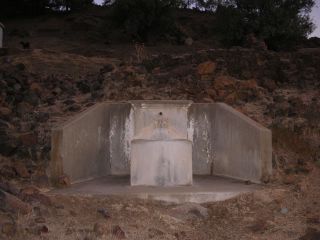 This photograph is of one of two public fountains, those two of what appeared to be few remaining structures from the now-occupied site of the abandoned village of Mansoura.

Although it's difficult to see, as I found the site at dusk, the stacks of stones around the fountain are, or were, walls, the rooms they formed now only figments of the imagination, conjured up from the floor plan they have preserved.

Having driven through Alevga, on the 22nd of August 2006, at first, I drove past this former village, dismissing the beautiful patterns of ruddy rock that I saw out of the corner of my eye as natural.

It was only after I saw the skeleton of a building and a fountain painted in copper and green, then checked with the locally-stationed United Nations Force in Cyprus (UNFICYP) peacekeepers that I returned and was struck by them.

According to the UN peacekeepers, this is what Dubin's (2005: 204) Rough Guide to Cyprus noted as "ex-Turkish-Cypriot Mansoura" (Dubin, 2005: 204), though the "houses finally being renovated by squatters as weekend retreats", were nowhere in evidence, which makes me worry that this was only a small part of the settlement or, worse, a few, outlying buildings away from the village itself, but having driven past and walked around, I didn't see anything else.

The skeleton of a building was being used as a pig pen and a canvas for a billboard advertising Riviera Swimming Pools Ltd, its walls still plastered, but pock-marked with what seem to be bullet holes, the surrounding land covered in broken tiles, burned-out barrels and a few discarded shoes (those, presumably, recently deposited).

In the Historical Toponymy of Cyprus, Jack C. Goodwin (1978: 544) identified Mansoura as a "former village", noting that "most of the inhabitants here were linobambakoi... from the 16th Cent [Sixteenth Century] through the first part of the present Cent [Twentieth Century]".

Mansoura was abandoned in 1964 because of intercommunal fighting, UNFICYP escorting the civilians out in Aug [August] of that yr [year]. The vill [village] was inherited by the UN & has since been in No Man's Land (at the NE [north-east] edge of the T [Turkish/Turkish Cypriot] Kokkina enclave, its houses derelict & falling down.

This fountain and the other were both built in 1957; they must have been some of the last, public goods established in the community before it was torn apart by the nationalists' violence.
Posted by samarkeolog at 5:31 am