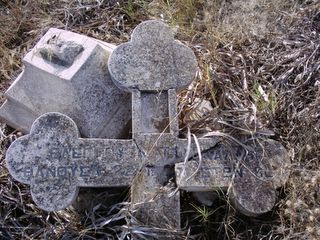 Touring cultural heritage sites with some other archaeologists - at the time looking for an altogether older cemetery - we stumbled upon this graveyard and its ruined memorials, of which this desecrated Greek Cypriot burial is an example.

I'm afraid I can't read the inscription adequately, but I believe that it names the deceased as Eleggou N. Ttyrkalli(?), who died at some point in 1971.