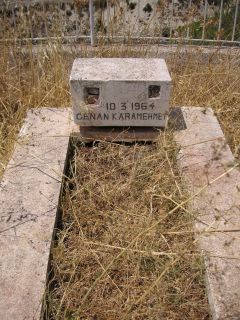 Surveying cultural heritage sites on my own, I came to Mallia because I wanted to see "the graves of six original villagers, killed in the troubles of early 1964" and the houses, some of which are now lived in by Greek Cypriot refugees from northern Cyprus or stayed in by Greek Cypriot city-dwellers from the region (Dubin, 2005: 141).

Cenan Karamehmet died on the 10th of March 1964; at some time after his burial, his image was prised out of its place. All of the graves in this Turkish Cypriot cemetery were vandalised in the same way; as at least one of the burials was in 1967, it is unclear whether it was a single destruction episode after that date, or whether the same acts were repeated upon the later memorials.