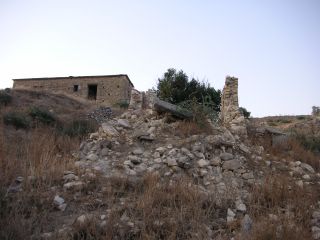 I've just put up one site from my amateur surveys* in Cyprus: it's Evretou, which was long a Turkish Cypriot village in western Cyprus, until, according to Jack Goodwin (1978: 296), the United Nations Force In Cyprus (UNFICYP) transferred the villagers to northern Cyprus in the autumn of 1975, after which, some Greek Cypriot refugees were settled there (temporarily).

I noticed, after I put up the notes about Alevga and Mansoura, that it might appear as if I were biased against the South, which is why I put up the notes about Agia Irini/Camlibel and Mallia, demonstrating, first, that there have been negative acts by nationalist groups in each community against each other and, second, that my work will address the negative acts of each group. I am not a "lover" of any side, as it has been said.

* I am an archaeologist, or cultural heritage worker, but I have not been trained in survey work and am not a surveyor. When I survey - inspect? - sites, I could not and would not try to plan them or their parts - the family homes, community fountains and so on - properly.

When I inspect the sites, I want to find out and record what character they had before and have now, what has happened to them and what is happening to them. It would be too much to claim they are examples of historic landscape characterisation, but I strive to document (what I judge to be) the central features and to capture (what I sense to be) the feeling of the place.

The photographic surveys:Through talking to their residents (hopefully in the future, [to] their former residents [as well]) and others, cross-referencing my findings in academic and media accounts and discussing them with other archaeologists, I can work out the truths of their histories and correct the mistakes, myths and lies about them. This is what I tried to do in the occupied abandoned village of Evretou.

[Poor phrasing corrected on the 30th of March 2007: I was worried that "talking to their residents (hopefully, in the future, their former residents)..." sounded like I wanted Evretou's current residents to become its former residents, when what I meant was that I wanted to talk with the people who had lived in Evretou before it became an abandoned village as well as those who had lived there since it was re-occupied.]
Posted by samarkeolog at 1:52 am